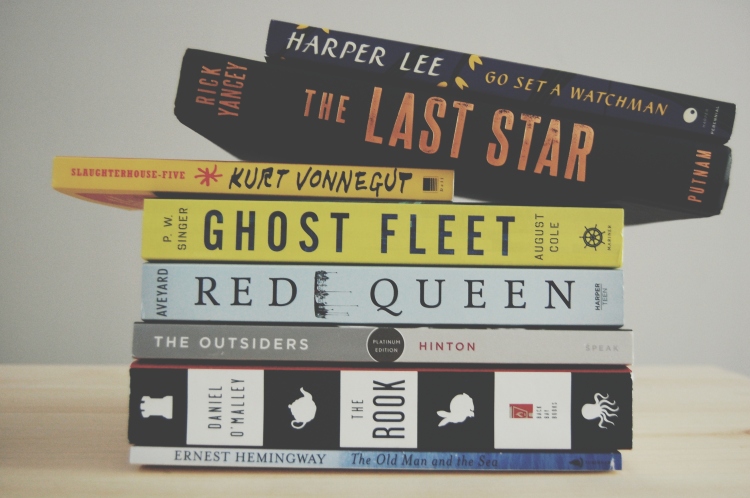 A week or so prior to moving, my mother instituted a ban on my buying any more books until after my arrival in North Carolina. I know. “You’ve got a ton you haven’t even read yet!” She said. “You don’t have any more room to pack them!”

She even went so far as to physically remove the very platinum edition of The Outsiders I have featured here from my own two hands while at the book store. I’ll admit, I told myself I wasn’t going to get anything that day but very quickly had several paperbacks catch my eye on the tables at the front (book lovers, you know what I’m talking about). I could feel the tension in my upper arms building as the muscles worked to restrain my fingers from snatching up everything around me. Cue my mother seeing the mania in my eyes and pushing me towards the coffee section of the store in hopes of my indulging in a different vice.

Jokes on her because within actual days of moving to North Carolina I dragged my parents on an expedition to the nearest Barnes & Noble and absolutely lost my damn mind. You would have thought I was a contestant on an episode of Supermarket Sweep, Bookstore Edition. Pretty sure I was the only person actually utilizing the plastic baskets pushed off to the corner of the entryway and let me tell you, utilize I did.

Confession #1: I only just recently read To Kill A Mockingbird. It was never required reading for me and so many people talked it up as a fantastic book (rightfully so, Harper Lee was a literary goddess of an inspiration) that I avoided it at all costs. I didn’t want other people’s opinions clouding my own judgment so I waited. Then, this book was released last year and I had to wait a little bit longer but finally got around to the start of Scout’s story back in January. Seeing this particular paperback, a little something whispered into my consciousness that it was finally time to start the end. I know it has received mixed reviews, but I really liked it.

Super refreshing to see a trilogy on the table again. These days I feel like a lot of young adult novels are going for gold in the length of series competition and I am not about it. The Lunar Chronicles? Fantastic, capped out at 4 and very well planned out. The ones where the authors willingly admit, having just published book 6, that they aren’t sure when they’ll get around to giving us closure? Unsubscribe. In my days of being a pre-teen youngin’, I could keep up with a 10+ book series! These days? Ha.

That being said, I’d have to admit that I was unimpressed with this final book. No spoilers, but also no closure.

Confession #2: never read this either. Kurt Vonnegut seemed to be the first runner-up to Shakespeare in every other high school English class in the country as so many people, real and fictional, referenced it as required reading. I only had one teacher who assigned us some of Vonnegut’s short stories but this book just never pulled my attention. Probably because I was too busy begging the same teacher to incorporate more Victorian literature. Apparently other kids thought that was boring but potato, tomato. So for years I’ve skipped this and then happened to walk by a copy in my already manic state. I made a bet with my mom that if it was more than $10 I wouldn’t buy it… $7.99, guys. $7.99.

Another personal opinion? Not my cup of tea. In fact, I consider this a regret.

I had some doubts about adding this book to my pile. I still have doubts. I get easily scared by things. I also consider myself to be a pretty paranoid person about the future and humanity and all of that from time to time so this book seemed as though it had the potential to instigate a massive panic crisis inside of me and yet it also seemed too interesting to skip over? That’s the exact train of thought that chugged on through my mind and I can promise you there are many more cars to come on that thing.

To summarize, this is a novel about the next world war. An opening note reads “the following was inspired by real-world trends and technologies. But, ultimately, it is a work of fiction, not prediction.” This is my current read.

Okay, let’s talk about the hard cover epidemic. Actually, you know what? Let’s bump it up to a pandemic. Let’s talk about the hard cover pandemic. I love a good hard cover, I truly do, but the concept of waiting almost an entire year to get a book in paperback is distressing. A few months? Fine. 6 months, even? Okay, for some kind of popular/renowned bestseller, sure. ONE YEAR? ARE YOU KIDDING? Not to mention as a series is published, the earlier hard covers tend to disappear from the shelves. So if you arrive at the series a few volumes late, you’ve got to wait that much longer to get books that will stay in format with the set you have already started to accumulate! This is a cause I very much believe in, people. Shorten Paperback Releases, 2016.

Anyways, yeah, I wanted to read this series and didn’t want the hard covers so I waited until the first one was comfortably paper backed before I picked it up and here we are, very excited about it. I can already tell that this will be my next Young Adult Fantasy Series pick because the first book just really hooked me in. As in, once I started I didn’t stop until I was finished. An actual blood versus blood war where people have evolved to have super powers… basically. It gets more complex, read the summary elsewhere.

My mom was astounded when I told her that I hadn’t actually read this book. It’s an 80s movie classic! And I love the 80s! And I always read the books before seeing the movies! Well, I’d done neither for this particular story and the platinum edition absolutely threw itself at me from the New Releases shelf so I couldn’t say no.

This freaking book… honestly, top of my list for Must Read recommendations to people now. It hits you in all sorts of places. Literally as soon as I finished it I watched the movie (the complete novel version, not the original) because I could not get enough. The story that S.E. Hinton creates is so… I’m at a loss for words. It’s incredible. Read it immediately.

My Uncle is my go-to recommender of sci-fi/fantasy books. He usually tells me to read things and I think “mhm, sounds like I’d like that, okay” and add it to my Goodreads list and then, oops, 10 months later it’s pushed down to the third page of the list. Riding his ‘The Kingkiller Chronicles’ recommendation wave, this time I made more of a conscious effort to pick up a copy. This is my up next read.

THE OLD MAN AND THE SEA | ERNEST HEMINGWAY

Darling, dearest Hemingway is my absolute favorite male author to exist in this here universe. His prose style is captivating and almost meditative, really. I was surprised when I saw that this particular work, one of his shortest, was a Pulitzer Prize winner but considering Hemingway won the Nobel Prize in Literature a year later, it makes sense that this would be the one to make a splash (anyone? anyone?).

Anyways, I went into it not anticipating to really relate to the story much and came out of it in my own sea of tears (I can’t stop). It’s a quick read, there’s no reason not to.

As always, please feel free to follow along with my recent reading escapades over on Goodreads and if you’re curious how I’m doing on my 20[16k] reading challenge then go check out my progress.

If you’ve read or will read any of these, let me know what you think!