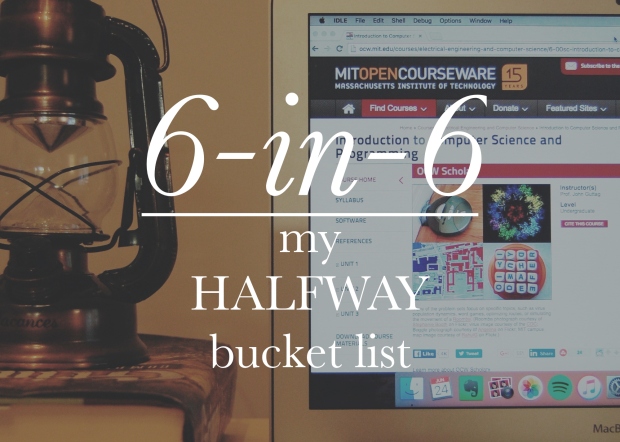 Although I tend to opt for reflections over resolutions when we hit those end of December days, that doesn’t mean that I don’t have a list of things that I want to accomplish throughout the year. My beginning half of 2016 was pretty action packed, but as I settle into a new home and a more routine life (at least for a little while) I wanted to make sure that I was still pushing myself to try new stuff.

So, I came up with this list of 6 things I want to do in the next 6 months.

Computer Science school drop-out doesn’t quite have the same ring to it, but I’m sure Boys2Men as Teen Angel(s?) would have made it work. Please, someone out there appreciate the reference…

I started college as an Information Science major, if we’re going to get specific about it, and only lasted about half the semester before switching into Finance. My reasoning used to be that I didn’t have the brain for coding, but I’ve since decided that that excuse is entirely inaccurate. It’s more like I just couldn’t keep up with the speed of the classes. I wasn’t entirely new to this, I had done some beginner HTML and C++ in high school, but it was still hard to get a handle on! A year or two ago I tried teaching myself how to code again and it’s… still a struggle. So I’ve been looking at some open source courses and decided THIS is the year I’ll do it. I’ll get to the finish line and I’ll get there at my own pace.

Another story of prior failures in life: I’m not musically inclined. Not to say that I haven’t tried (violin, saxophone, guitar, chorus) but I never found something to stick with (aside from singing Paramore’s greatest hits in my shower) and I’ve wanted to get into drumming for a while now! It’s impossible for me to listen to music without moving, whether it be tapping a finger or bouncing a leg or flailing in circles screaming the lyrics to S Club Party with friends at a “silent” disco. Drumming felt good for me to get into so I’ll let you know how that goes.

This is the year for a crafty Christmas. Believe it or not I started working on things for people in January and I’m determined to give my close friends and family personally cross-stiched gifts. I’m not ruining any surprises with this announcement because who knows exactly what they’ll get cross-stitched for them? That being said, funny suggestions are appreciated.

I’ve moved to an entirely new region of the United States of America and as a newbie, I want to explore my surroundings a bit. It’s absolutely ludicrous to me that I’ve been bitten by this home country wanderlust bug all of a sudden when I spent the other 22 odd years of my life within a 6 hour driving distance of 10 other states and 1 other country and did I do much exploring of them? Honestly, not really. Now all of a sudden I’m like “woo! gonna take a weekend trip to Cincinnati!” The good side of this is that I’ll have so many voyages to share with you.

In recent years I’ve developed a fear of flying, which is utterly insane given how much I’ve travelled in said recent years. My brain has started to rationalize that the fear is coming from the element of unknowingness. Since I don’t know the technicalities of how we’re flying and how the pilots are controlling the craft, it makes me that much more panicky. And I mean really panicky, like tears streaming down my face mid-flight panicky. How do I figure I’ll confront this fear? I’ve got it in my head to maybe get my pilots license. But baby steps! Let’s get me up in a smaller airplane first and see how that goes.

Being one of my favorite foods, I reckon I should learn how to make it. When I was in Ireland I spent some time with an Italian couple who were amazing cooks and they shared a few secrets of the trade. Let me know if you want in on the taste test!

Sitting by the fire playing board games. Curled up on the couch watching movies. Waking up groggy after late night wrapping to greet anticipating little ones at 6am. Christmas passes differently for every family. Mine happens to be on the busier side of life, with a lot of time spent in the car traveling to visit pretty much every relative we realistically can. But according to the song it’s the holiday season, not just the day, that warrants celebration.

22 years of my life have been spent calling Newport my hometown, but I never take advantage of appreciating it during the holiday season. Being away at college means I miss out on a lot of that festive time at home. We pick out our tree right after Thanksgiving and I don’t see it again until after finals. But some of Newport’s best spots are right at my neighborhood’s fingertips – in the downtown area – so this year I decided to spend a little bit of time walking around this wonderful City by the Sea to gaze upon my favorite December decorations.

I’m no professional photographer, but I wanted to share these spots with you in hopes that they inspire two particular things: 1) you’ll want to come visit this beautiful little seaside haunt next Christmas season and/or 2) that you’ll go out on adventures to appreciate your own hometown holidays. 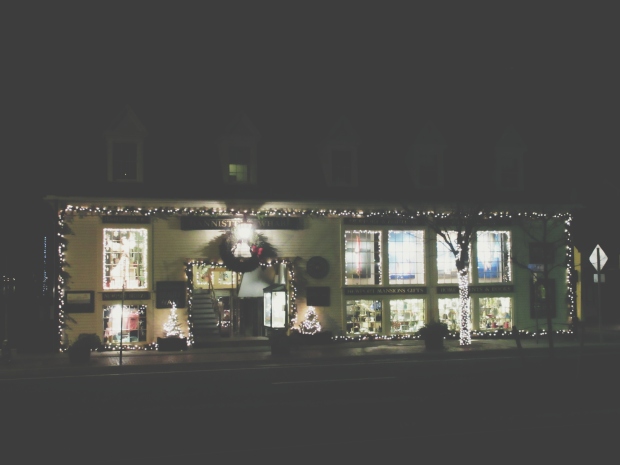 Newport Wharfs get a lot of twinkle light bling around shop windows for Christmas. Not to mention an abundance of trees inside of said windows.

Everything is prettier with a wreath! – Winston Churchill, probably

The entirety of December features garnished boats floating around the harbors – a particular specialty of a seaside Christmas. 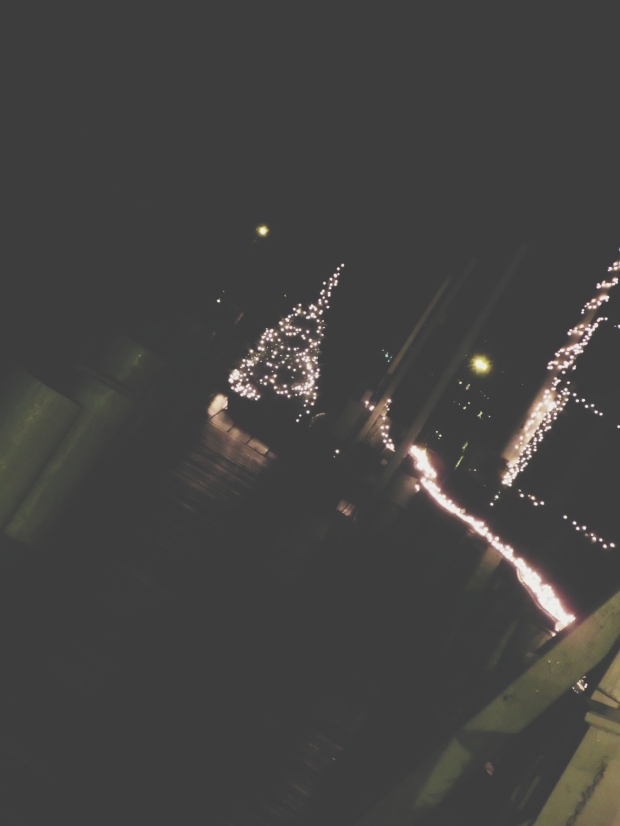 Even our docks get decorated. This one at the end of Bannister’s Wharf houses one brave against the waves Christmas Tree.

Only in Newport would a giant mast serve as a better decoration than a giant tree. My vote is to keep it lit all year round. 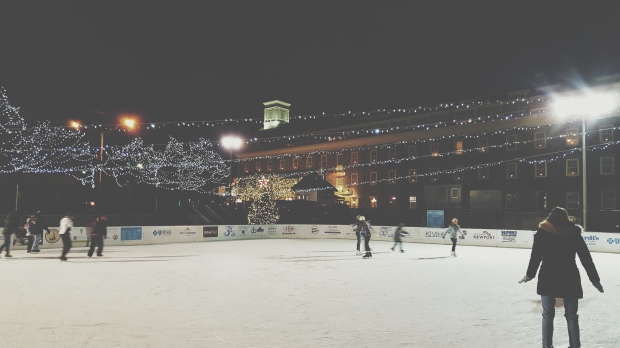 A dockside skating rink which I’m very glad was brought back for the townspeople to enjoy this year. Plenty of wonderful memories spent teaching my little brother how to skate down here.

The wave is an iconic Newport monument and if you look closely you’ll see two snuggly feet poking out of it. 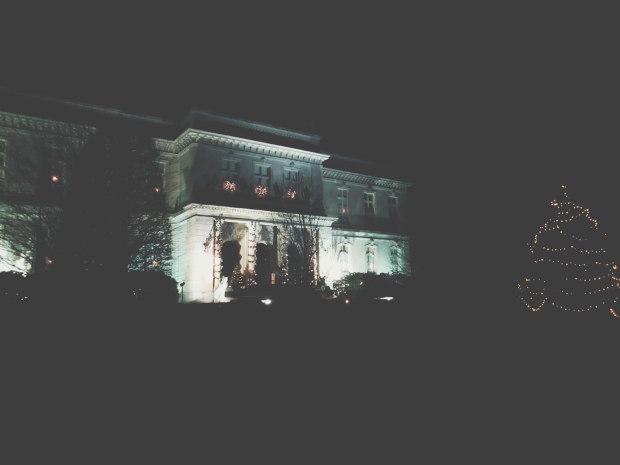 If you ask me – the mansions on Bellevue need a little more Clark Griswold to them. The Elms was the best decorated in my personal, professional, and holiday emotional opinion.

Newport Bridge – the best Christmas lights of them all

To you and yours – have a blessed (in any way, shape, or form) Happy Holidays and keep love in your hearts. Looking forward to sharing more Tales of Casstastrophe with you in 2016!